In my last post, I wrote about the essence of Patanjali Yoga. In this post, I wish to introduce one of the profound Indian scriptures Yoga Vasistha Ramayana.

After touring the country, young Rama becomes disheartened experiencing the apparent reality of the world. King Dasaratha, the father of Rama, expresses his concern to Guru Vasistha about Rama’s dejection. Guru Vasistha consoles the king by telling him that Rama’s dis-passion (viragya) is a sign that the prince is now ready for spiritual enlightenment. Yoga Vasistha is dialogues between young Rama and Sage Vasistha.

The text is structured as a discourse of Sage Vasistha to Prince Rama. It is in the form of replies given by Vasistha to young Rama’s queries regarding philosophical problems of life and death, and human suffering. This was before the story of Ramayana as we all know begins.

Yoga Vasistha is a philosophical text attributed to Valmiki. The complete text contains over 36,000 verses. The short version of the text is called Laghu Yogavasistha and contains 6,000 verses.

The text consists of six parts.

“A Hindu text par excellence, including, as does Hinduism, a mosaic-style amalgam of diverse and sometimes opposing traditions.” Christopher Key Chapple, scholar religions of India, namely yoga, Jainism and Buddhism. He is Doshi Professor of Indic and Comparative Theology at Loyola Marymount University, Los Angeles. Incidentally, he also wrote a blurb of my book The Highest Ignorance.

Other Hindu scriptures like Mahabharata, Ramayana, Pyurama, Vedas, and Upanishads, in most such scriptures mystical stories make it difficult to grasp the real meaning and the message.

Yoga Vasistha has chalked out for itself a new and distinct path. At first, it enunciates a doctrine in several ways and then elucidates it with beautiful stories. There in it gives also rules of guidance for the conduct of life in the daily world.

On who is ready for spiritual knowledge; Yoga Vasistha states that there are four characteristics that mark someone ready for a spiritual journey who:

It is the actions of the mind that are truly termed karmas. True liberation results from the dis-enthrallment of the mind. Those who have freed themselves from the fluctuation of their mind come into possession of the supreme Nishta (meditation).

When the mind be purged of all its impurities, then it will become as still as the milky ocean undisturbed by the churning of Mandara hills; and all our Samsaric (worldly)  delusion attendant with its birth and deaths will be destroyed.

Then in the 5th chapter, the crux is;

The variety of worldly objects are nothing but Maya. Those victors who have crushed Maya never sink into it again. If Gyanis long after them, then no doubt Siddhi-s will arise through the above-mentioned means.

Medicines, Mantra-s, etc. can confer Siddhi-s on one, but never the beneficent Moksha. If a desire wells up for attaining a Siddhi, then with the effort it can be developed; but the desire for Siddhi-s tends to bondage and does not arise in the hearts of Gyanis.

Sage Vasistha very well distinguishes between the Siddhis for the worldly purpose and the Siddhi for the higher purpose of Moksha.

With the extinction of all desires, Atma-Gyana will dawn, but those who are lost in Siddhis which generate desire will not attain Atman.

Handpicked related post: How we waste our Short life? 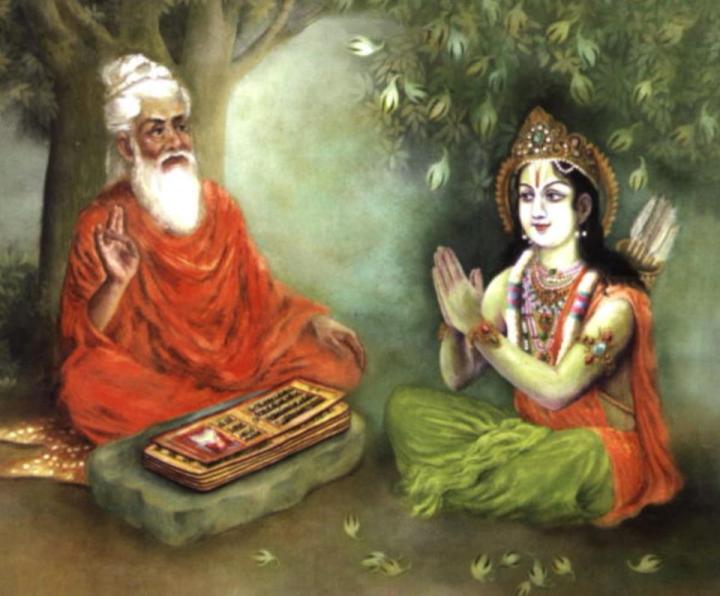 Finally, Rama also asks,” How can salvation be obtained by those who are of the degraded family, without intelligence, performing bondage-giving Karmas, of vicious tendencies and without Gyana?

To which the sage replied, “ To the ignorant who are subject to many weaknesses, there will arise many re-births of diverse kinds. These rebirths will not cease until the first Gyana stage is reached.”

Some of the key quotes from the text:

You may ignore all the stories and mythological references as there may be different interpretations, but the central message and principles Sage Vasistha explains are very profound and makes it a must-read for all spiritual, aspirants.

Yoga Vasistha is a valuable book for the seekers of the real meaning of human life.

Handpicked related post:  Do you know the 1st Step on the Moksha Path?